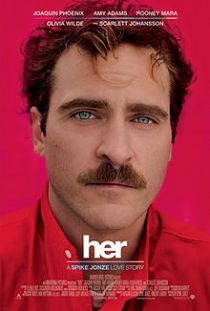 My wife was reluctant to see Her because she thought it might simply be a quirky story that had garnered favor with the Hollywood in-crowd.

I convinced her to go only after Spike Jonze won the Academy Award for Best Original Screenplay.

I was right. In my personal opinion, Spike definitely deserved it because Her is a sci-fi epic poem—a true love story crafted directly from a writer’s hands and heart. You can almost see Spike having a dialog in his writing head with…Her.

And Joaquin Phoenix lives the role so completely you can’t get between him and…Her.

See it with an open mind and an open heart.

Internet entrepreneur in identity, personal data, and governance frameworks
View all posts by Drummond Reed →
This entry was posted in General, Movies and tagged films, Movies, spike-jonze. Bookmark the permalink.