Interstellar: See It in the Biggest Baddest IMAX Theatre You Can 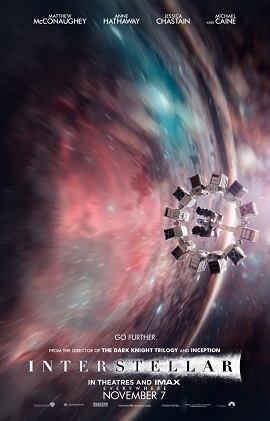 Christopher Nolan is quite possibly my favorite living director. Inception soars among any other film in the last decade; as far as I’m concerned, the fact that it was not nominated for Best Director is one of the most damning omissions in Academy history.

The Dark Knight Rises, though in a different lane, was equally successful, and did Nolan ever “stick the ending” (his own words).

So my expectations for Interstellar were very high.

Nolan does not disappoint. While Interstellar does not rival Inception in terms of sheer cinematic virtuosity, or The Dark Knight Rises in terms of dramatic punch, it charts its own new territory on several dimensions:

Though the path he takes to get there is sometimes elliptical and tenuous, in the end Nolan’s exploration of the central question—humanity’s existence beyond earth—resonated with me so deeply in the final scenes that afterwards I knew it was one of those films I’d be thinking about on my deathbed (should I be so lucky).

It is hard to ask a film—or a director—for anything more.

Internet entrepreneur in identity, personal data, and trust frameworks
View all posts by Drummond Reed →
This entry was posted in Movies and tagged christopher nolan, inception. Bookmark the permalink.