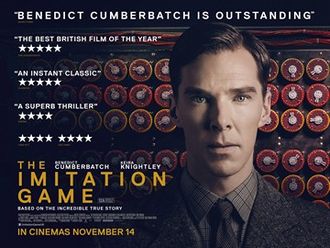 As each year closes, I find myself thinking about the “high water mark film”—the movie that did the most in the past year to raise the bar for filmmaking as a whole. This doesn’t mean it will be the Best Picture winner (although it’s almost always at least a nominee). Rather it’s an entirely subjective judgement in my own mind of how much a particular film did to push the cinematic envelope.

Last year that film was Gravity. This year, although Interstellar was spectacular in many ways, and will live long in my memory for the power of its message of survival, the high water mark film is The Imitation Game:

And at the center of it all is the sheer brilliance and moral power of Alan Turing. Almost no man alive can fully appreciate the impact he has had on the world we live in today. He’s been one of the great unsung intellectual heros of modern times—and this, finally, is his song.